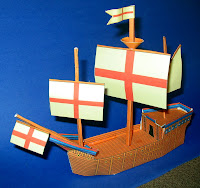 A little gift for my blog readers that ventures outside of my writing, just a tad. Earlier this year my son had a school assignment on the explorer John Cabot. While researching the good explorer, we stumbled upon a replica of his ship, a reproduction of a 15th century caravel, christened the Matthew. (You can read about Cabot and the Matthew here.)
I got it in my head to create a paper model of the Matthew... and here is the result!

I think it looks rather spiffy, if I say so myself.

So as a Christmas gift to you, here are three caravels in PDF (Acrobat Reader) format that you can build— includinga 15th Century English Caravel in the Matthew's colors, a pirate version, and a version that lets you add whatever colors you like! You can find them all (and the instructions for building them) here.

It's the night before the Rutgers University Council on Children's Literature One on One Plus Conference, and I'm sitting in a hotel room with three fellow writers from middle Tennessee, going over notes about which editors and agents we plan to descend on—okay, "introduce ourselves to—" at tomorrow's conference. I can't post photos tonight (we've taken a few silly ones; it's late), but our "gang of four" for this event is myself, Sharon Cameron, Hannah Dills, and Jessica Young, all from the Nashville area. We've had a great time planning together, traveling together, and encouraging each other.

There's more to do tonight, but I'll close with a look at that last. Writing is a process done alone, but it need not be a lonely process. Nothing makes you better able to write, or helps you bear the frustration and disappointment, or lifts your spirits, like a group of fellow writers— friends who understand what you are going through, because they are going through the same experiences yourselves.

So write, but find friends. They'll keep you going; and as a writer, keeping going is sometimes the most important thing you'll do.

As the summer winds down I'm getting back to life as usual. It's been a busy time, what with driving back and forth from Tennessee to North Carolina (summer camp, family reunions, etc.). But with my son's school starting up again, I'll be home and blogging more frequently for the foreseeable future.

I do have one trip I will be making— to the annual Rutger's University Council on Children's Literature One-on-One Plus Conference. (Yowzers, is that a long name! Try saying it all in one breath.) I had the honor of being invited to attend two years ago; it's great to be going back.

For those who are interested in writing for children and teens, the Rutger's conference is one of the best to attend. It's by invitation only, based on a submitted writing sample of three pages— that's right, you have three pages in which to wow the conference planners with your manuscript. So simply getting in is a Very Big Deal. But what makes the conference significant is that all attendees are assigned a mentor for the day— a mentor who is either an editor, an agent, or an established published writer. Your mentor critiques your submission, offers manuscript advice, and can be an invaluable guide to point you towards the right agent or editor for your work— if they don't request it themselves. Attendees also take part in an intimate Q&A session with four other attendees and their mentors— that means by the end of the day, no matter what, five industry professionals (four of whom are probably agents and editors) will have met you, spoken with you face to face, and heard your pitch. But the biggest part of the deal is the lunchtime meet and greet opportunity, where you eat dinner at a table with editors and agents— you pick— and have the opportunity to go speak to as many editors and agents as you desire. These agents and editors are from major agencies and publishers— firms like Curtis Brown, Writer's House, Atheneum, Henry Holt, Simon & Schuster, Scholastic, and more. So, yes, I am more than happy to be returning.

Also coming up in September is a local conference sponsored by the Midsouth regional chapter of SCBWI, which I'm looking forward to as well.

So it looks like the fall is going to be as busy as the summer— and that's a good thing.

Coming Up for Air (and a Poem)

Well, for nearly three months now I've been working on a ghostwriting project for a client. It's been an intense time, and hasn't left much room for blogging. But now it's done, and before the next project gets started, I thought I'd update everyone on what's been going on.

So far, no word yet from any publisher or agent on my first novel. That's not all that unusual for first novels, and I have had several "close... but could you send us more stuff; we really like the way you write" responses, which for a writer are golden. Basically, they're an open invitation to query. (Yahoo!) Even better is a project that-yes-I-am-working-on requested by an editor way too long ago... but at the time, all she had seen was one sentence. She's since seen three chapters in rough draft and asked for more... and I've been all-too-slow about finishing it up. But I'm eight chapters in now, and finally cranking along. So another "Yahoo!" on that.

As for the ghostwriting project, that's been a solid case of God's blessing coming along right when I needed it. I can't go into details, but it's been a joy to do and I'm very pleased with the results.

Other tidbits: I was honored to judge a teen writers' contest for the Franklin Public Library Young Adult department here in my hometown. We had a number of entries, and it was hard to choose the winners. But all the young writers did a great job; imagination is alive and well in Tennessee!

Finally, it's National Poetry Month... so here's a poem I'm trying to live by these days:

The Storm
by Howard Shirley

Cast your bread upon the waters;
wait not for the perfect tide.
The faithless boat remains at harbor;
the nobler ship at sea abides.
For when the storm assails the shore,
‘tis hesitation stoves the hull;
and delayed dreams are burst asunder—
never will her hold be full!
Then inward sails the trusting captain
who risked his dreams to Fortune’s storm,
and finds at last his treasure waiting;
his family well, his hearthstone warm.

The Present and Future of Publishing

At least, that's what we're seeing in the publishing world. Long established houses are either closing or being swallowed by other houses and then closing (Hmmm... sounds rather like Municipal Darwinism). Imprints (a fancy word for what amounts to a "brand" division, not that readers care) are being reabsorbed left and right. And publishers, editors, associate editors and editorial assistants suddenly find themselves being chased by the industry equivalent of Alice's Queen of Hearts. WHACK! There goes another one...

What's a writer to do?

Relax, says this one.

Whether the industry shakeup is based on a media-produced economic panic (I think partially so, but that's a topic for a different setting), or based on industry false steps (and there have been a lot of these), I think for writers the end result will be positive.

In fact, I think we're going to witness a sea change in children's books over the next few years, which will all be to the good of writers, readers and the industry.

My predictions are that we will see a switch back to "tried and true" book themes over avant-garde, risky titles. Publishers are going to want books that sell in quantity over the long haul. This will have a two-fold impact. Quality will become even more important (good for the reader), while content will be targeted towards the consistent reader over the get-'em-to-grab-it crowd. As a result, we'll see less retreads of television shows and less controversial social commentary. Controversial issue-oriented stuff sells, but it has a limited market vis-a-vis the general public. It sells to a certain segment of the readership, and then stops. Temporarily it may get a boost because of controversy, but then the interest dies as soon as the next headline pops up. Instead, publishers will begin to trend toward books with broad-appeal themes. Some will be flashy, of course. But others will be quiet, literary in their quality rather than in their assumed social significance. Escapist literature (adventure, fantasy, action sci-fi, mystery and romance) will get a boost, as will "comfort" reads. Historical fiction will also likely pick up.

I might be wrong, and as a writer of more escapist stuff (with a literary bent), I might be engaging in wishful thinking. But, to put a label on it, the industry is going to go "conservative" in product, in appeal at least. And I'm not certain that's such a bad thing. They may discover they've been missing a large part of their market in recent years. And if that brings more readers to the bookshelves (and I think it will), even the avant-garde titles will pick up again. And that's good for all of us.

In the meantime, I'm going to write.

In case you haven't heard yet, today NASA announced the definitive discovery of methane on the planet Mars. Why is this significant?

1.) Methane is a known by product of life. (Mars farts, as it were...)
2.) Methane can be broken down easily by basic chemical processes; if there were no life on Earth, our atmospheric methane would disappear in about 10 years. This means that the methane on Mars must come from active processes; it has not been hanging around for millions of years.
3.) Methane can also be a food source for certain types of life.
4.) The presence of methane implies the presence of water; the two processes we know of which produce methane (volcanic activity and life) both require water to supply the hydrogen atoms in methane.
5.) Though volcanic activity can produce methane, there has been no sign that any volcanic activity has occurred on Mars for millions of years— no geologically recent lava flows, no fault lines, nothing.

So, we have methane, no evidence of recent geological activity, and only two known sources which can produce the gas. Either there's volcanic activity going on which we haven't detected (and don't see other evidence for), or a natural non-living process to make methane which we don't know about, or something on Mars is alive.

Now that is some seriously cool news.

For more, go here: Methane on Mars
Posted by Howard Shirley at 1:49 PM No comments: