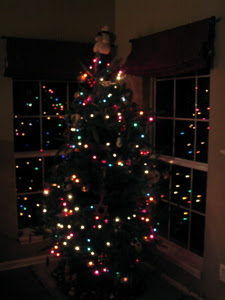 It's early evening on December 25. I'm thoroughly stuffed with Christmas dinner. I've opened presents and watched my family open theirs. My son is upstairs, practicing his tempo and finger-thumping on Guitar Hero III (Dad's turn comes later). And I'm sitting downstairs, looking at the lights on the tree and thinking about the day and the year.

I'm not going to say it's been an easy year; it hasn't. It's been a long year of learning (yet again) that nothing moves quickly in the publishing world, that "nays" outnumber "yaes," and that writing is a stressful way to make a living.

But there have been blessings as well.
I've been blessed by the love and patience of my wife— and most especially by her understanding. When well-meaning others have said something on the order of "you just need to write a bestseller like John Grisham," she understands just what a gut-punch a sentence like that is. She shares my frustration when another "no" comes in, and my elation when that rare and beautiful "maybe" arrives as well. And she assures me that the "yes" will indeed one day come. Surely her value is higher than rubies.

I've also been blessed by my critique group. They've offered me support and encouragement, as well as the honest advice necessary for the writer to succeed. As I've written before here, you cannot write alone and be a success. Tolkien and Lewis had the Inklings. I have been blessed to have the Knights of the Library Study Table. (Not really our official name. Our official name seems to be "the writers' group that gets together in Brentwood every Friday, more or less.") (You can visit the websites of two of my fellow writers via the links to the left.)

I've been blessed by the support of my regional chapter of SCBWI (also in the links to the left). Tracy Barrett, Candie Moonshower, Genetta Adair, Patsi Trollinger, and Alan Gratz have all offered encouragement and advice, which I treasure. I also have to extend my thanks to Ben Weiss and Jaramy Connor, from my e-mail critique group. There are undoubtedly others I've neglected to mention, for which I must beg forgiveness. Thanks to you all! (By the way, the links in this paragraph are to their web sites featuring some truly great books. If you want a good read for the holidays, you can't go wrong starting with these authors!)

I've been blessed, as I said, by a few "maybes—" those moments when an editor or agent says, "Yes, this sounds interesting. I'd love to read it." Those maybes are precious. And even on the few occasions when they turn into "nays," the "nays" occasionally turn out to be longer and more helpful than the form letter in the return envelope. (Like all writers, I hate those.)

Other blessings have come from family, from friends, from my church, and all from my God... the God whose Son's birth I sit and contemplate today.

"And now these three remain: Faith, Hope and Love. But the greatest of these is Love."

May you too know these blessings.

Where Do You Get Your Ideas?

My fellow writers recognize this question. It's the one question we're all guaranteed to hear, whether from readers or would be writers. I suspect the answer is the same for all of us: "Everywhere." Perhaps that's a bit general, but it's true, at least for me. My next idea may come from something I see, something I read, or a chance comment I overhear. Sometimes I don't even realize I've had an idea until it bounces around in my head for awhile, collides with a few other randomly bouncing tidbits, and then fuses to create something that makes the writer part of me think, "Hang on, that's interesting." And then I hang on to it, make a few notes about it, and then... then I forget about it for a long time.

You read that right. In fact, that's what happened with The Weaver of Atreia. I had the idea that became the story years ago— over 15 years ago. But that idea wasn't even for The Weaver of Atreia. It was for an entirely different story; a mystery set in a fantasy world. I made the outline for that mystery, and set it aside. Skip ahead to 2002 (give or take a year). That summer, I was approached to ghostwrite a novel for a recording artist. (Sometimes other people bring you their ideas. And then pay you to write them. I like that. ;-) ) I completed the book in about two months (I don't recommend that schedule, by the way). Having finished that project— my first effort at a book-length work*— I realized that I could indeed write a novel. All I needed was the idea.

So I searched through my old notes and found the outline for the mystery story. But it needed a lot of work. For one thing, it needed background. And it needed a stronger, more original setting. And it needed... a protagonist.

As I set to work on the setting and background, I remembered a book I had read as a teenager about the medieval guild system of Western Europe and the Hanseatic League. I decided a culture based on a stronger version of the guild system would be an interesting setting— and from that decision a young apprentice named Devon popped into my head. The story's background then sprung from, among other things, the Norman Conquest of England, the Byzantine Empire, the Persian invasions of ancient Greece, the medieval English wool trade, and the rise of the merchant class which led to the Renaissance. (The great thing about fantasy writing is that you can borrow from all sorts of historical settings and events, mix them up, and create something unexpected.)

So I sat down and wrote the book right away... well, not exactly. I wrote the first few pages, and set it aside to work on something else. A few months later, I picked it up again and wrote three chapters. And then I set it aside again. For three years. (I don't recommend this writing schedule, either.)

That's when my wife stepped in. She asked me if I was serious about writing books. I assured her I was. She then advised me to attend a writers conference and join a writers organization. (Advice to writers: Get married. Motivation sometimes has to come from a kick in the pants.) She discovered the Society of Children's Book Writers and Illustrators . She discovered the local chapter was hosting a writers' conference. She told me to join and told me to go. Being a reasonably wise husband, I did as I was told.

Following the conference, I was charged. I was motivated. I wrote another chapter!

My wife was not impressed. (Advice to writers: One chapter is not a novel. Nor is one more chapter.) Clearly, I needed more than one conference.

So I went for the biggie: the 2005 SCBWI Summer Conference in Los Angeles. Plane tickets, conference fees, and arrangements to bunk with my brother-in-law followed. And I wrote two more chapters! (Advice to writers: Two more chapters aren't a novel either.)

At the conference I had a great critique from writer Q. L. Pearce, met some terrific fellow SCBWI members, heard some eye-opening advice from writers, editors and agents, and realized... I was in need of help. Specifically, I needed a writers critique group. (Advice to writers: Don't work alone. Write alone, yes. Work alone, no. Get to know other writers. Share your work. Hear their opinions. And listen to them.)

In a remarkable turn of events that I can only attribute to Divine intercession, several local writers were interested in starting just such a group. We had our first meeting in a Borders bookstore cafe in Brentwood, Tennessee. After trying to talk over the cappucino machine twice, we moved to the Brentwood Public Library. Two years later, we're still there.(If you hear a noisy bunch of writers in a backroom on Friday mornings, that's us. Forgive us. Writing is indeed a silent occupation, but when writers gather, all that silence explodes.)

Our schedule was (and is) weekly. The critique schedule we set up was an absolutely naïve one calling for one chapter per person every two weeks.

It's amazing how quickly you can critique six chapters.

It's amazing how that, when your critique group has critiqued your fifth chapter, you realize you had better be writing more chapters if you're going to keep up with that two week schedule. And avoid kicks in the pants from both your spouse and the six other writers in your group.

Over the course of a year, I suddenly found I had lots of ideas. And prodded by my wife and my critique group I wound up with lots of chapters. (Advice to writers: Lots of chapters? Now, that could be a book.)

(Just remember to write them down— the difference between an idea and a fleeting thought is often at the point of a pencil.)

*Yes, the ghostwritten novel was published. Unfortunately, by the terms of my contract I can't identify the book or the person whom I wrote for. I take comfort in that I was well paid. :-)
Posted by Howard Shirley at 3:19 PM No comments: