But Some Smell Just As Sweet

In my last post I wrote (okay, raved) about Rosemary Sutcliff.

If you love Sutcliff (and if you don't, what's wrong with you? ;-) ), then scurry over to your library or local bookstore and ask for books by Rebecca Tingle. Her first, The Edge on the Sword is a terrific historical novel in the Sutcliff tradition. Aethelflaed is the daughter of Alfred, King of Wessex. Educated and willful, Aethelflaed loves nothing better than to sneak out to ride the horses. But she is a king's daughter, promised in marriage to secure an alliance against the Danes who have invaded northern England. When conspirators attempt to kidnap her, Aethelflaed convinces her bodyguard— a thrall sent by her future husband— to teach her how to fight for herself. Eventually, Aethelflaed finds herself not only fighting, but leading men in a desperate battle against Danish raiders intent on her capture... or failing that, her death.

Tingle's treatment of this very real young lady is remarkable both for the way in which she captures the culture of the time, and for her terrific handling of both the action and suspense of the situation. Tingle's Aethelflaed is a wonderful character, true to her time yet very modern in her appeal, both to girls and boys. The book is also beautifully written, engaging from start to finish. Rooting for Aethelflaed to win is made all the more exciting by the historical reality of her triumph. What a great role model for young women... and what a great book.

Tingle has written an excellent sequel, Far Traveler, about the adventures of another young lady of Old England... but I'll let you read it to learn more, as her fate has much to do with Aethelflaed's.

Two books is a good start. Let's hope that Tingle returns again with another tale from history. I'll certainly be looking for it!

A Rosemary By Any Other Name...

... would not read the same as Rosemary Sutcliff.

I first discovered Rosemary Sutcliff as a boy of 14, thanks to a recommendation by my 8th grade English teacher, Mrs. McElheny. My teacher knew of my love for King Arthur stories, and suggested I read The Lantern Bearers. I loved it. Here, for me, was something new. A book about King Arthur that had nothing to do with wizards or round tables or magic swords, but instead sprung from the shadowy history of Post-Roman Britain as the Romanized British fought a long struggle to hold back the Anglo-Saxon invaders. Here I first read of the Roman Empire's decline. I saw in the tale of Flavius how civilizations fail and fall, how cultures change or even disappear, and how that is simply the way the world works. And I met for the first time a cavalry leader named Artos, who may (or may not) have been the real King Arthur.

What a delicious, wonderful, beautiful, lyrical and exciting book. Battles. Swords. The Legions abandoning Britain. A legionnaire abandoning his duty to Rome for his duty to home. Desperate escapes. Bitter losses. Bitter anger. Useless revenge. And a war that began a legend. Forget the lousy Bruckheimer movie or the over-rated Zimmer-Bradley book. Rosemary Sutcliff's Artos will always be to me the real King Arthur.

Oddly, though I loved the book at the time, I did not read anymore Rosemary Sutcliff books for nearly twenty-five years. Then, in a game rulebook, I stumbled across a reference to her name and another title— The Eagle of the Ninth— and my memory of The Lantern Bearers came back. I promptly sought out The Eagle of the Ninth, bought it, and devoured it. That sent me to seek other books: Outcast, The Silver Branch, The Lantern Bearers, The Shining Company, The Mark of the Horse Lord, The Shield Ring, Sword Song... all of which have left me in awe of Rosemary Sutcliff's imagination, language, and gift for capturing vanished ages and filling her tales with people who are wonderfully real. And though her characters may never know each other, or even live generations apart in time, she skillfully weaves links between them— an heirloom, a trinket, or even simply a shared place, though centuries parted— like little hidden treasures for readers to discover. In the midst of real history, she gives her own creations a history as well. The result is like whispers echoing through time, a reminder that we, too, are connected with our past, and will send our own echoes down into the future.

And now for a little taste of the present. Though I have sought and read every book I could find of Sutcliff's saga of Britain, one book has remained elusively out-of-print: Sword at Sunset, Rosemary Sutcliff's treatment of the life of Artos himself and his final fate at the battle of Camlann against (or alongside?) Medraut... known to legend as Mordred. For an Arthurian fanatic like myself, it has been a Holy Grail that I despaired of finding. But no more. I just learned that Sword at Sunset has been reprinted. My quest will soon be at an end.

Take up the quest yourself and discover the treasure that is Rosemary Sutcliff. You'll enjoy every stroke of her pen. 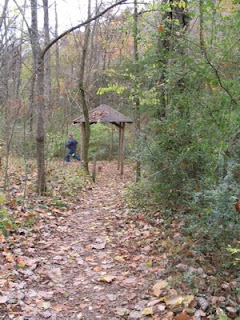 So, have you written anything lately? Need a kickstart? Here's another image for you.

What's most significant about this image is that there is a person. You cannot have a story without a person.

That doesn't mean your person has to be human, or even alive. Stories have been written about rabbits, dogs, rats, trains, cars, robots and even a toy canoe. But even if you write a story about a rock, in very short order you will discover that your rock gains personality, purpose, even dreams; it becomes a person.

So, back to the image. Here we have a place, a person, and an action (running).

Where is this taking place? (You decide, of course!) When?

What is the structure?

And, of course, why is the person running?

There, I've given you a start. Look back at the other story starters (#1 and #2). Maybe you can combine these ideas. (Hey, if I saw a skull hanging in the trees in a strange wood, I might have a reason to run...)

As always, there is no right or wrong choice; just the one that makes your story better.

In my workshop on Sunday a young writer asked me how to write when he didn't feel like writing. As a writer, I've had times like that. I still do. You think about writing something, whether it's a project you're working on, or a new one you want to start, or even... well, even a blog entry, and you just don't feel up to the task. Nothing pulls you into the project. No ideas float into your head (they never do). Or you're convinced you have nothing to say. How do you write then?

My answer is one I have to credit to author Caroline B. Cooney— "You can do anything for 15 minutes." You grab a kitchen timer, set it for 15 minutes, sit down with pencil and paper (or in front of your computer) and write.

When you're done, you can look back over the garbage and glean out the 10% that isn't garbage. And whatever isn't garbage... is treasure.

But you may just find that when the timer beeps or buzzes or dings (or whatever your timer does), you'll be annoyed with that timer. Because you don't want to stop writing. You're into your project. Your head is pouring over with ideas, and they have to come out right now. Or, best of all, you still have a lot more to say!

Hey, just because you've done something for 15 minutes doesn't mean you can't tack on another 15!

So here's today's challenge. Grab that timer. Tell your family that you are going to write now, and they aren't to interrupt you for twenty minutes (tell them "twenty" because they'll probably forget the last five). Pull out your journal. Open your word processor. Read the last few pages of your project. And write.
Write now.